TINA TURNER - The way she became a rock-icon

80 years "Queen of Rock" - in 2019 Tina Turner can look back on eight decades of an extraordinary life. With over 180 million records sold, numerous awards and records, she is one of the most influential singers in the world. Born in Tennessee as Anna Mae Bullock, she began her career in 1958 as a background singer for Ike Turner and his band "Kings of Rythm" in St. Louis. For promotion reasons Bullock became Tina Turner and then went on tour as "Ike & Tina Turner Revue" through the USA, Europe and Australia. After 14 years of marriage, in which the artist had to experience violent excesses of her husband on her own body, she separated from Ike Turner and started her solo career in the early 1980s.

The beginning of an extraordinary solo career

Exactly 35 years ago the rock icon released her album "Private Dancer". Today it is one of the top 100 most sold albums worldwide and has won a total of four Grammy Awards. The "Queen of Rock" also released her first number one hit "What's Love Got To Do With It" as a solo artist. Furthermore, Turner established herself as an actress in numerous movies. For the movie "Mad Max – Beyond Thunderdome" she not only wrote the successful title song "We Don't Need Another Hero" but also took part in the role of "Aunt Entity" herself.

Tina Turner started her first solo tour through Europe in 1985 with the "Private Dancer Tour", during which she performed in Munich and Klagenfurt. Only three years later, Turner secured herself an entry in the Guinness Book of Records when she gave the biggest concert as a solo artist in Rio de Janeiro in front of 188,000 fans. In 1991, she released the acclaimed hit compilation "Simply The Best", which reached 4th place in Germany. Moreover, the collaboration with musical greats like David Bowie, Mick Jagger or Bryan Adams adorn the glorious career path of the American singer. 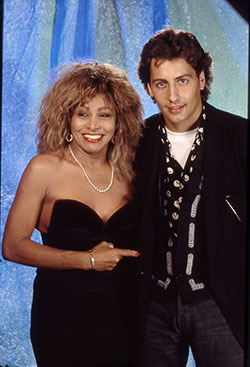 The photo shows Tina Turner with ex-BRAVO-boss Alexander Gernandt, who interviewed her several times in the 90s.

At the Grammy Awards in February 2008, the "Queen of Rock" was not only awarded another Grammy, but also touched the audience very much with her joint performance with Beyoncé Knowles. This year Turner continued emotionally: the rock legend said goodbye to her fans with the "Tina! 50th Anniversary Tour" and finally left the concert stages of this world in May 2009.

But to this day Tina Turner continues to shape the music scene and has become an idol for many people through her remarkable career. Because she is and remains: Simply The Best!