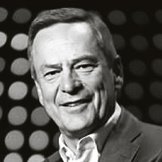 For more than 35 years, Bernhard Kurz works as a producer in musical- and showbiz. Together with his brother, Friedrich Kurz, he entrenched the genre musical in Germany in the 80s. The beginning was the probably most famous musical "Cats" followed by "Starlight Express" and "Das Phantom der Oper".

During his career he became an expert in tribute musicals and shows.
Since 1997, Bernhard Kurz produces the Las Vegas live Show "Stars in Concert" at the Estrel Hotel in Berlin. "Stars in Concert" is a lookalike hommage to the global super stars of the past 60 years. With worldwide success, Bernhard Kurz produced tribute-shows about the Beatles ("all you need is love!"), ABBA ("Thank you for the music"), Elvis Presley ("ELVIS - The Musical"), the Blues Brothers ("I'm a Soul Man"), Tina Turner ("Simply The Best") and the successful record lable Motown Records ("Memories of Motwon").

ogether with his company COFO Entertainment, Oliver Forster is one of Germany’s most successful event organisers for concerts and tours. Not only does he fill famous concert halls and open-air theatres with big names such as David Garret, Xavier Naidoo, Elton John, CRO and Simply Red, he is also a renowned tour organiser. Among others, he has staged biographies by star producer Bernhard Kurz such as “All you need is love! - The Beatles Musical”, “THANK YOU FOR THE MUSIC – the ABBA-STORY”, “SIMPLY THE BEST - The TINA TURNER Story” and “ELVIS – The Musical”.

In addition, Oliver Forster is one of the leading local organisers in Southern Germany and Austria, presenting stars from the genres of rock, pop, schlager and folk music as well as dance shows, festivals, exhibitions and top-class classical music events. One of his most successful projects was his own production of “FALCO – The Musical” in 2017. Over the last two years this show has welcomed more than 250,000 spectators at more than 100 events. In 2018, his next genial performance is “BEAT IT” – The Show about the King of Pop”.